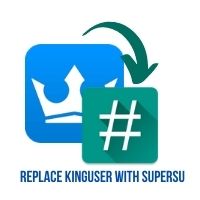 Easy Way To Replace KingUser With SuperSU In 2022:- Have you also rooted your Android using the KingRoot application? If your answer is yes, The Kinguser app must be installed on your Android device.

Anyway, rooting an Android device is a common practice these days. You can easily access all the internal features of your device through the rooting process.

If for some reason you also want to change Kingroot to SuperSu on your Android device or you are looking for an easier way to do so, then you are on the right web page.

In this tutorial, you will find step-by-step instructions to Replace KingUser With SuperSU app. By following these given guidelines, you can chain from Kinguser to SuperSu without any error.

(Which is used by most people today to manage root permissions)

Before you can switch Kingroot to SuperUser on your Android, you should have some important knowledge about both the rooting apps. Or you should know why you are replacing Kingroot in Superuser.

You will be able to take the right decision by knowing the difference in Kingroot V/s Superuser given below.

»Kingroot gives you easy end-to-end access to Android. And its control will be completely in your hands on your Android. While SuperSU gives you access to the Android end, you will no longer have control over your system and will not handle Android.

»If you have rooted your Android with Kingroot. So the ads coming from other apps will not spoil the performance of apps on your device. Or if you install any creek app by mistake then it can harm your phone. Whereas nothing like this happens in SuperSU.

»It consumes your data connection when you download additional content like your Android installed apps, app drawer, etc., or bold icons. As a result, it can affect your Android’s bandwidth and battery. Whereas nothing like this happens in SuperSU.

»Sometimes it is also seen that it becomes very difficult to override the process of Kingroot to remove Kingroot from an Android. Whereas removing SuperSu is very easy.

Some Basic Requirements To Replace KingUser With SuperSU:-

Dear Android User To change or remove you from Kingroot to Superuser from your device, you need to do some basic Requirements mentioned below.

How To Change Kingroot To SuperSU

Friends, if you also want to replace Kinguser with SuperSU on your Android or you want to uninstall Kinguser from Android, and then follow the given guide thoroughly to remove Kinguser and Unroot Android devices.

Step 1: First of all you need to know that your Android smartphone or tablet is rooted, and the Kinguser app should be installed on your Android device. Step 2: Now make sure that you have enabled the installation of apps from unknown sources on your Android or tablet: Instructions: Settings -> Security -> Device Administration -> Click on Unknown Sources. Step 5: Once the app replacement process is over, the SuperSU app will automatically open on your Android. Step 6: Now, when you open the Apps menu on the home screen of your Android device, you will not see the Kinguser app in the Apps menu. That’s all, now you have easily replaced Kinguser with the SuperSU android app with given guidelines.

Step 1: You can easily replace Kingroot with SuperSU using your Android PC. To get started, you’ll need to download the (replace Kingroot with Supersu zip file download) “Replace_Kingroot_With_SuperSU.zip” file to your computer or laptop. And open it on your PC. Once you have opened the .zip package on the PC, you will see a folder named “mrw” containing four files in it.

Step 2: Now, you need to enable USB debugging mode in your Android device by clicking on Phone Settings -> Developer Options -> USB Debugging. Now connect your Android smartphone or tablet to the computer and move the “MRW” folder in the box to your device’s internal memory.

Step 3: You will now have to go to Google Play Store on Android
Terminal Emulator has to be downloaded and installed. Once installed, launch the application.

Step 4: Now, a prompt to ask for root permission on your device
message will appear. G1rant it.

Step 5: In this step enter this (sh /sdcard/mrw/root.sh) command in Terminal Emulator for Android App

Step 6: You will initially see some error message on your Android, but at the end, the SuperSU app will be launched. If it doesn’t, launch the manually installed SuperSU app on your device and update the “SU Binary”. Once the update is done, please reboot or release the memory and root again.

Simply. That’s all, now you have successfully replaced the Kinguser android app with the SuperSU application using PC.

Dear Android Users, You can easily replace your Android from Kinguser to SuperSU by following the above-mentioned guidelines.

If you face any problem in replacing Kingroot with SuperSU on your Android by following the guidelines given here then you can let us know in the comment section below. We will be glad to solve your problem.